Timezone is an action/exploration game inspired by Activision's 1984 classic H.E.R.O. (from here on referred to as HERO because those extra periods mess with my punctuation sensitivities). I played this game a lot, thus I have quite a bit to say about it. Please excuse the occasional lack of structure and if I sometimes ramble on a bit too much.
Also, I have a confession to make: I only ever completed the game years later when I started replaying it on an emulator and made use of save states. For shame! With that out of the way, let's take a look at Timezone:

If you load a C64 game, especially one on tape, there is a good chance for the data transfer to take a good while. Now imagine that all you see during that time is a blank static screen, and after 20 minutes you realize that the loading process froze 15 minutes ago, but the tape kept on running.

To let you know that loading is still in progress, many games display a graphical effect like this one:

Screens with wrong aspect ratios are a pet peeve of mine that seems to follow me around everywhere I go. Each time I see a TV where people's faces look stretched I get the urge to find the remote and correct the display's aspect ratio.

All screenshots on this blog are pixel perfect, which means that each pixel of the original image is represented by one pixel (or an integer multiple thereof) on your screen. This also means that the pictures are not aspect-corrected.

On a real C64, the displayed pixels are not perfectly square. Instead, they are squished horizontally at a ratio of about 0.936:1. This assumes the computer is a PAL model which was the predominant version in Europe.

For this reason, the images shown here are all a bit wider than they would appear on the real hardware. This is most noticeable with pictures containing spherical objects, like this one: 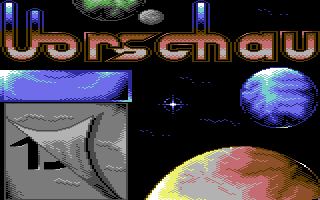 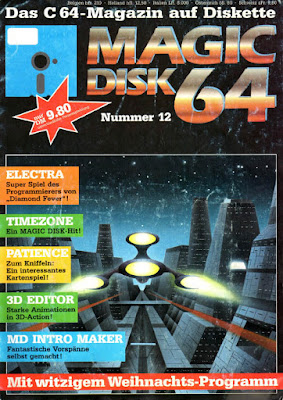 Cover
Magic Disk 64 was two years old when this issue came out, and it still used the same metallic logo from the very first installment. Unlike the airbrushed cover image, the logo was created with a graphics program. The resolution wasn't quite high enough for print, though, and there are visible dark fringe pixels where the letters meet the blue backdrop. Back then I thought it was kind of cool that the logo was made with a computer.

This issue sports one of Magic Disk 64's better cover images. The artist likely took some inspiration from the sci-fi movie TRON (1982), in particular the "solar sailer" sequence.

Most of the time, each issue's cover art was meant to illustrate one of the games on the disk. In this case, Electra was chosen, as it features a spaceship that flies over futuristic platforms. The actual game looks totally different, but at the time it was pretty common for the cover art of any game to be an artist's loose interpretation and not an accurate representation.

I remember being fascinated with the cover picture's cool colors and the mysterious futuristic world it conveyed. It was probably the main reason why I bought this issue. The overall perspective might be rather dodgy, but I still like this one.

The 16 Colors of the VIC-II


The C64's graphics chip, the VIC-II, is capable of displaying 16 predefined colors:

There are technical tricks to convey the illusion of more shades, but the C64's graphic artists are mainly stuck with the 16 colors provided, which makes their creations all the more amazing.