While Xenon by the Bitmap Brothers is widely remembered, especially its sequel on the Amiga, the same can't be said for Krypton. Admittedly, the latter only saw releases on a diskmag. And yes, I'm using plural here. More on that later. 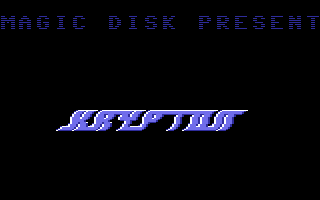 The game opens with this title screen where the Krypton logo seems to have slipped halfway down the screen. It's totally static, even though it is entirely made up of sprites, and there would be enough space for a classic sine curve movement. Admittedly, there is something to be said about deliberately holding back and not overdoing it with stuff moving about on a game's title screen. 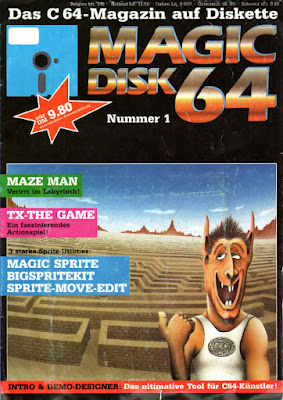 * by which I mean not official at all

Once again, the creator of the cover took some extensive artistic license. Neither the player sprite nor the maze looks anything like what is depicted here. I'm not complaining, though, because replicating the game's actual look would've resulted in something resembling a color vision test with an off-brand Pac-Man in the middle.

All in all, this cover image is not too bad. There are quite a few things wrong with Maze-Man's upper body proportions. I mean, try imagining him without the shirt. Actually, don't. I'm sorry I even suggested that.

I like how his spiky hair and ears line up with the mountain backdrop. Whether this alignment is on purpose or not, to me it conveys that he is a part of this world. While faces aren't the artist's strength (as you'll eventually see when I get to issue 03/90), this one's done well enough to bring the guy's opinion of the maze behind him across.

Today on Adventures in 16 Colors I take a look at MegaParatrooper!, a multi-stage game that switches genres so frequently that you spend more time waiting for additional parts to load than playing the actual game. I'm not exaggerating.

That is certainly one of the largest title logos I've come across in a while. It also belongs to one of the worst games I've had the pleasure to review so far. We've officially reached a low point in software that got published on Game On.

Since we're still in the middle of Edutainment Month, here's a look at another utility that could be interpreted as educational: Geninus! is a tool to create sine curves for sprite animation. I guess the name is a portmanteau of generator and Sinus (German for sine), since it is, in fact, a sine generator. I would've called it Sinerator instead, to keep the words in the right order, but Geninus! is a fine name as well, especially with the added exclamation point. 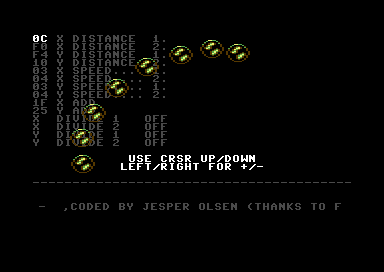 This isn't a very complex program, but I still wanted to put it in an article, mainly because of its presentation and how, back in 1990, it introduced me to sine curves in a very practical way.

April is Edutainment Month, and I'm using it as an excuse to waffle about something else than a game. Intro & Demo-Designer is a creation utility for intros and demos. Admittedly, that stretches the definition of edutainment a bit, but I expect to be more entertained (and possibly educated) by this program than the more recent games I had to endure on this blog. 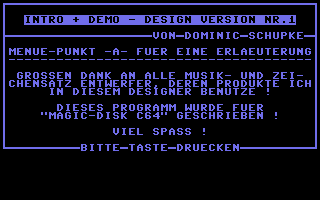 Don't judge the program by its very plain welcome text. This tool packs quite the punch, and it allowed twelve-year-old me to spruce up several of my rather rudimentary BASIC games.

Decton is a gravity-based action game similar to Muse Software's Space Taxi from 1984. Instead of passengers, you have to fetch nondescript cargo from several platforms placed across the level and transport it to the starting point. Expect to swear a lot when playing this one. 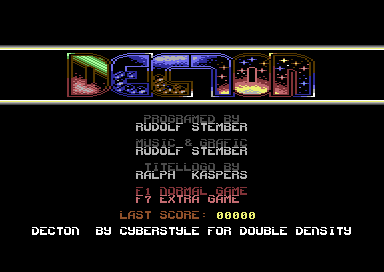 That is one colorful title logo, I have to say. So colorful in fact, it uses all of the C64's available colors, except for one. Sorry, Violet, this party's just not for you.