It's TX - The Game, not to be confused with TX - The Musical or TX - The US State. It's a fixed vertical shooter for one player. It's also one hell of a mess.

It's got a sweet mountain backdrop, though.

Maze-Man is a game about a yellow ball that eats a lot of dots while differently colored enemies are chasing it. If the yellow ball gobbles up all the dots, the next level starts. If one of the baddies touches the yellow ball, it loses one of its three lives and has to start the level anew. I can't shake the notion that this concept sounds vaguely familiar... 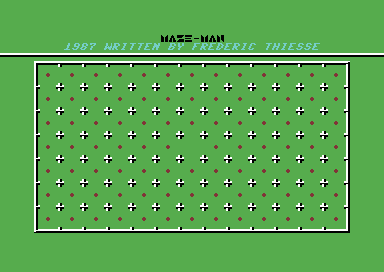 Yeah, it's Pac-Man. Even the font used for the title is as subtle as a sledgehammer. 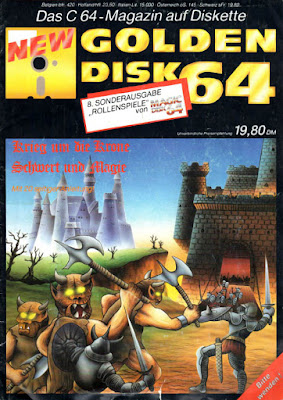 Cover
This was the first Golden Disk 64 issue I ever bought. It was NEW, because it said so on the cover. As you can see, it was about double the price of Magic Disk 64, with the reasoning that Golden Disk games were of a higher quality. This wasn't always the case, but the content of issue 08/90 isn't too shabby.

The cover illustrates the game Krieg um die Krone. It shows a scene where humans are battling a horde of trolls. Well, horde is maybe not the right term when there are only three of them visible. I assume there are more trolls coming from the left side. Otherwise, they'll soon be completely outnumbered once that army of knights in the background joins the battle.

I don't quite understand why the castle's moat and interior seem to be violently ablaze, even though the trolls haven't reached the drawbridge yet. Maybe setting one's own castle on fire is a valid medieval defense strategy I'm simply not familiar with.

On second thought, I just remembered the reason for random stuff burning. Once you play the game, you'll get a good idea why it's not improbable for a castle in Krieg um die Krone to be aflame. The scorched trees to the left might already clue you in.

Even the odd circumstance that two castles were built almost next to each other on precariously craggy terrain is just in keeping with the game's world.

Krieg um die Krone translates to War for the Crown, which concisely explains the strategy game's goal. You and up to three other players take the roles of barons who are trying to find three symbols of power in order to become the realm's king.

Apart from competing against your human opponents, you also have to put up with armies of trolls and a sadistic dragon that just likes to burn stuff. 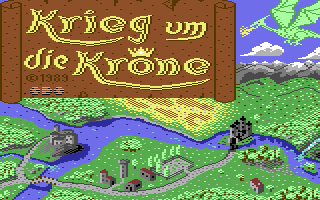 Look at the green bastard there, casually flying across the sky and already breathing fire with a gleeful smile on its lizard face. Maybe it wants to burn away that huge title parchment blocking most of the horizon.