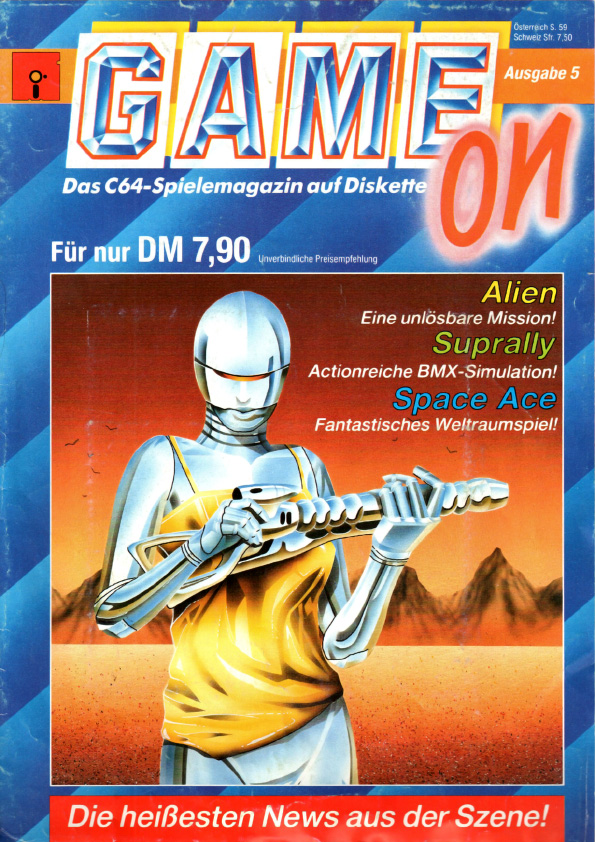 Cover
Scantily-clad feminine robots were quite the thing during the eighties, popularized by the Japanese artist Hajime Sorayama's detailed illustrations of gynoids. 1989 saw the release of Blue Angel 69 (geddit?), a puzzle game that contained loads of chrome erotica clearly inspired by Sorayama's work. The game's C64 version was created by members of X-Ample Architectures who also worked on several titles released on CP Verlag's diskmags. It's no wonder then, that the subject matter also made it onto one of their diskmag covers.

The connection is tenuous at best, but the artwork is related to one of this issue's games: In Alien you play a female engineer who has to fight a worm infestation on an alien planet. However, in the game she's not a robot and she's not dressed as if she just got out of bed. I guess some false advertising was taken into account to sell some more copies based on the cover alone.

The artist did a good job reproducing the chrome style, though, and avoided any serious anatomical blunders, compared to previous efforts. Her left arm looks a bit longer than her right. But it's not an actual human anyway, thus unusual proportions could be on purpose.

The background is a bit of a hellscape and seems to be on fire permanently. The environment in Alien is more like a futuristic city and less like a sky texture from Doom. This is probably again a case where the artist only got a rough description of the game and just did their own thing.

Today we're looking at Compunet, a puzzle game that heavily borrows from two other puzzle games and makes them slightly worse in the process.

Today's game is Aidon - The Apocalypse, a vertical scrolling shooter that is heavily inspired by Jaleco's Valtric (1986). 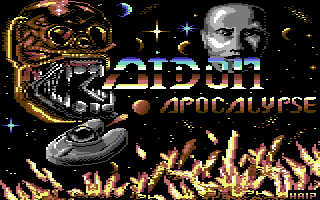 Judging by the loading screen, this is certainly not your run-of-the-mill apocalypse. In this corner of the galaxy, the end times are heralded by giant metal faces and even larger translucent skulls sporting mechanical teeth. Our hovercraft looks suspiciously like a repurposed Roomba which is rather unfortunate because the ground is currently on fire. At least I think those yellow tentacles are supposed to be flames and not some spiky alien vegetation.

The title screen's music goes on for quite a while, even though it only takes a few seconds until the game asks me to press space to continue. The track is oddly laid back, almost as if the apocalypse were the perfect occasion to relax and take it easy. I guess, if you are in the right frame of mind, the final revelation might indeed be the ideal time to go back to bed. Everyone's existence is about to end anyway and you can't do a damn thing about it. But wait, I hear the game whisper, there is something you can do after all! Simply step into your trusty hover tank and try to save the universe all by yourself!

B-Bobs is a single-screen platformer that takes some inspiration from the arcade game Pang and adds a cranial twist to it. Quite fittingly, it eventually becomes a bit of a headache to play.

For today's game, Elite Squad, I simply want to show you the loading screen without giving away any details just yet: Based on the name and this image alone, what kind of game do you expect to play? A vertical or horizontal shooter with an exotic roster of enemies? A platformer depicting the player character's recurring nightmares? An action RPG in an unsettling sci-fi setting?

Up until now, I've deliberately skipped over any Pong clones that I came across on CP Verlag's diskmags. Mainly because all of them were either tediously boring and/or made with minimal effort. Dynamoid is different. It's still Pong, but it does its best to hide the simple gameplay behind an outstanding presentation.