Today we're looking at Compunet, a puzzle game that heavily borrows from two other puzzle games and makes them slightly worse in the process.

It starts with this stylish title screen that really wants to make sure you know what the game is called. The curving logo is already pretty remarkable, as it uses ten sprites. Since the C64 only provides eight hardware sprites, some raster trickery had to be devised just to achieve this effect.

At first glance, one might think the circuit board is modelled after the C64's PCB but that's not the case. I can't really tell if it's based on an actual board design or if any of the chips exist in reality. There's a copyright notice printed on the board that suggests we're in the distant future of 2092. M.G.P. might refer to the three people who worked on the game (namely Gábor Komar, Péter Varga and Gábor Magymathe) because the initials sort of fit with some of their first/last names.

The title music starts out pretty tame but then goes into overdrive at the 2 minute mark. It was composed by Péter Varga who went by the handle Griff. It's a very good track and I remember just staying on the title screen to hear the tune in its entirety.

The game's diskmag article doesn't elaborate on any backstory. One doesn't expect a puzzle game to have a narrative anyway, but as we saw in Elite Squad, that usually didn't stop CP Verlag's article writers from making up some preposterous piece of fiction.

Let's just press the fire button and see if the game has some story to tell.

After the somber announcement of Level 01, a somewhat baffling view of a giant checkerboard with an azure alien landscape is revealed.

The aim of this part is to get the two green bars to align horizontally by shooting them with projectiles of different sizes. The bigger the ball, the larger the bar movement. The bars work like a balance scale, so if the right one goes up, the left one goes down and vice versa.

What makes this task difficult is the computer-controlled cannon on the right side which is trying its best to keep the bars unbalanced. After a few seconds of delay (during which the computer can already shoot at will), I get to control the left cannon and have to counteract what the computer is doing. I have to achieve this within the given time limit or I'll get an immediate Game Over. The game also ends if I allow any of the bars to reach the top. I guess at that point they take off into space never to be seen again.

If this seems oddly familiar to you, then you've probably played Mastertronic's Dynamix:

Not only was the game concept lifted wholesale, you can also see where the circuit board theme came from. Whoever wrote Compunet's article in the disk mag obviously wasn't familiar with Dynamix, as they praised this part of the game to be entirely original. Admittedly, Dynamix (or Kinetix, as it was previously called) isn't well known. It isn't even listed on Lemon64, and I learned about its existence only two years ago.

Having played both games, I notice that Compunet's version is a bit more chaotic and unpredictable. Sometimes it takes me a long time to get an equilibrium, and sometimes I win almost immediately. It's quite possible that I lose in the very first round, even though it's supposed to be the easiest.

In any case, I got lucky and succeeded within a matter of seconds. The remaining time is added to my score and then we move on to the second half of Level 01:

Surprise! It's Tetris! Or let's call it a version of Tetris. A version whose randomizer insists on giving me L-pieces for some reason. Furthermore, a version whose I-piece looks like this: 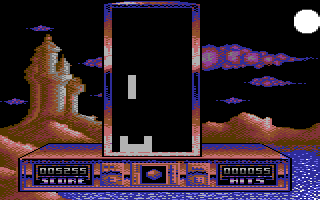 That's not a tetromino, it's only got three squares! The nerve!

The background is a bit of a departure from the earlier electronics theme. We are now relaxing at the lake and enjoying the majesty of a massive sand castle. While playing bootleg Tetris on what looks like a rather bulky gaming device.

There are a couple more differences to regular Tetris. The most aggravating one is that you can't nudge pieces sideways into gaps. Here's an example:

I held my joystick to the left, but the S-piece refused to slide into the opening. Moving pieces into gaps is a mechanic almost any version of Tetris supports. Its absence makes the game significantly harder and also worse to some extent. Furthermore, there is no way to accelerate a piece's falling speed. Pushing the joystick down immediately drops a piece all the way.

While lines vanish when filled out, Compunet doesn't care how many of them you make disappear at once. Since the I-piece isn't four squares long, it's actually impossible to create a Tetris, i.e. to clear four lines at once.

In order to complete this part, I have to survive a given number of pieces. On the first level, I need to place twenty pieces which isn't a problem even if I screw up early on. The HITS counter in the bottom right keeps track of the remaining pieces, though it counts down in steps of five for some reason. Five is also the number of points you get for each placed piece. No bonus points are awarded for cleared lines.

While I had known about Tetris beforehand, Compunet's version was actually my first hands-on experience with the game. Only later on did I realize that there were significant differences to the real thing. 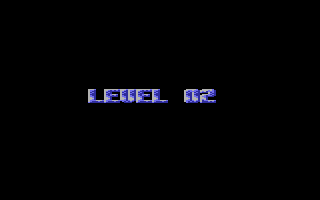 Now, as far as I can tell, the only aspects that change for subsequent levels are the time limit in the Dynamix part and the number of required pieces in the Tetris part. Neither the computer cannon's behavior changes, nor do the Tetris blocks fall down any faster. The graphics of future stages also remain the same.

I never managed to finish the game back in the day, as I usually ran out of time in one of the later Dynamix parts. To this day I'm still not sure how Compunet determines when the two bars are correctly aligned. Pretty often I think they are balanced but the game somehow disagrees and continues counting down the timer.

That said, the wonders of emulation now allow me to retry the same stage without having to start from the beginning whenever I fail. That makes it much more likely for me to get to the last level.

I've reached Level 10, the game's final stage. Luck is on my side and I complete the first part with hardly a struggle. I still don't know what I'm doing here.

The second part takes considerably longer, as Level 10 expects me to place 200 pieces. I did a pretty good job I think, considering how limited this version of Tetris is.

And with that I've completed the game. All that's left now is to see if Compunet has an ending sequence at all...

Well, color me surprised, it does! It's quite a good ending, too, mainly because it's delightfully weird:

A monitor switches from static to a clock that turns to midnight. Then an alien head appears and says CONGRATULATIONS. There's even a sound effect that vaguely resembles speech but without the handy subtitle it'd be impossible to make out. Then a catchy ending tune sets in and loops indefinitely.

Despite my earlier comment about puzzle games not needing a plot, I get the impression there was some intended backstory that inspired this end sequence. Were we challenged by some antagonizing alien race to complete a crazy challenge before the day was over? Did we just ensure the continued survival of the human race by playing off-brand Tetris?

Compunet is technically competent but not very original. Both level parts are somewhat inferior versions of existing puzzle games which leaves a bit of a bad aftertaste. That said, I still got some enjoyment out of the game during this replay. The Tetris part is compelling as usual. Because, you know, even in this stifled form, it's still Tetris.

Graphically, the game has some style. While the whole circuit board idea probably came from Dynamix, Compunet still has a visual identity of its own. It's not just a puzzle game; it's a puzzle game taking place on what looks like an alien planet with huge checkerboards and sandcastles.

The best thing about Compunet by far is Péter Varga's soundtrack. The game's three tunes are all worth a listen. The in-game music lasts over 7 minutes and lends some excitement to the gameplay. Here's a video:


According to the SID Tune Information List, Péter Varga sadly died several years ago. We'll be seeing his name in quite a few more games released by CP Verlag, all of which feature great music.
Posted by Renzo Thönen at 13:51