Have you ever wondered what Bomb Jack did as a wee lad before he became the world-famous, cape-wearing bomb disposal officer? No? Well, that's too bad, because Baby Jack is here as an unofficial prequel, telling you all about the hero's thrilling past when he was still a tiny toddler.

The original Bomb Jack was an arcade game released in 1984 by Tehkan. It saw conversions to a lot of home systems, including the C64 in 1986. 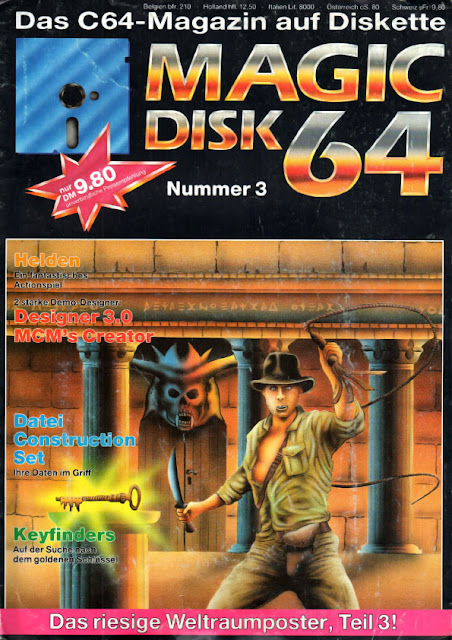 Cover
Any self-respecting treasure hunter knows about the Golden Key and the curse that is connected to it: Legend has it that any man who lays eyes on the mystical door opener will have his countenance changed to that of Indiana Jones. However, that does not mean he'll become a Harrison Ford look-alike, no. Instead, he will morph into the unpleasant proportions of an off-brand Chinese-manufactured Indy action figure. His face will forever be marred by lopsided, sloppily painted-on eyes, a nose that looks unfit for breathing, and a mouth completely devoid of an upper lip. He will eternally wield an oversized knife and a whip, without knowing why, and he will be damned to replicate famous poses from the movie posters.

Not everybody can have an Oli Frey to do the artwork for their magazine, but deary me, this is quite the car crash. I like to imagine that the first draft of the cover was such a perfect rendition of Harrison Ford's features that somebody at CP Verlag strongly suggested changing the face in order to avoid a potential lawsuit. At that point, the original artist was unavailable, so the alterations were hastily done by a hapless staff member who barely knew how to hold a pencil. That's not what happened, but I like to speculate.

Aside from the dodgy art, the subject matter is also a bit strange, especially if you're familiar with Keyfinders, the game this picture is trying to represent. There is no golden key in the game. The protagonist does not use a whip or a knife. He is wearing a hat in the game, true, but it is purple, and so is the rest of his outfit. Ok, the color discrepancy can probably be forgiven. I wouldn't expect the cover to depict a guy dressed completely in purple unless it is a Prince album. On the other hand, that'd probably make for an epic image, if done right.

The rest of the picture is actually fairly decent, and I remember, as a kid, I found the combination of warm and cool colors on the pillars quite striking. It sort of reminds me that orange/blue would become a very popular color scheme for game box art (and movie posters) decades later, at least for a while.

I know it's hard to take one's eyes off the disastrous cover image, but it should not go unnoticed that the magazine's logo, the disk image, and the spiky price tag underwent some alterations. They now look a bit more stylish and less like they were drawn on an Amiga.

Today's game is The Yawn, a German text adventure illustrated with 36 multicolor pictures. It takes place in a decidedly weird fantasy realm and provides a ton of humorous text that doesn't always hit the mark and sometimes veers into rather questionable territory.

The colorful title screen is conspicuously abstract and manages not to reveal anything about the game. It's well-drawn, but nothing about it says fantasy to me. The catchy tune playing in the background also does its best not to evoke any medieval vibes at all. It's possible that the title logo and the music were commissioned before anybody really knew what The Yawn would be about. It's also possible that this was done on purpose since The Yawn is meant to be a parody and not a straight-faced fantasy story.