Ever since Snake found its way onto Nokia phones back in 1998, it has become one of the most widespread and well-known game concepts in existence. Long before that, the world was already brimming with Snake variants, and the game I'm playing today is one of them: 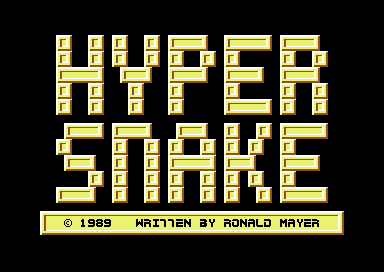 According to GameBase64.com, 1983/1984 saw the release of no less than seven C64 games that were called Alien. Only one was related to the well-known 1979 sci-fi movie of the same name. In 1990, an eighth Alien game got unleashed on the C64, and it would change the world of gaming forever.

I'm kidding. It's just a game with aliens in it.

Have you ever played Codemasters' BMX Simulator? Would you be interested in a game very similar in style but with worse controls? If so, I have the perfect title for you! 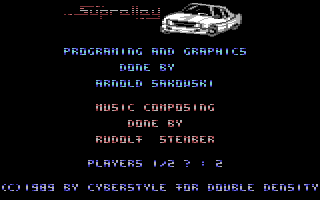 This is Super Rally. I mean, SupraRally. No wait, it's Sup... that can't be right... Suprallay? At least that's what it says in the game menu. The loading picture has a different opinion how the game is supposed to be called:

Welcome to Space Ace, an action game where you steer an exceptionally fragile ship through narrow corridors (and space, occasionally).

The intro screen shows promise: Somebody decided to build what looks like a public restroom in space and added giant Tesla coils for dramatic effect. The geometry is purposefully lopsided, presumably to unsettle potential visitors so they don't stay there for too long. I guess there are also showers, and that's a soap ball in the top right corner. While the central spaceship's design is quite awesome, I'm not sure where it fits into the game, as the vessel you get to fly certainly looks nothing like this.

There is something extraordinary weird about the music that's playing here. While it never sounds off-key or outright wrong, it is sorely in need of some proper structure. Throughout the tune, it feels like the musician got bored of whatever melody he was working on and then just switched to something else for a couple of beats. This happens so frequently that the result is a confusing, meandering mess with abrupt transitions and drums that erratically change tempo until they seem to stumble over themselves.

Today's title is a single-screen action/puzzle game with a theme that is plenty puzzling all by itself. It's Harp Lifter!

Wait, actually, it's It's Harp Lifter. I mean, It's is part of its name. It starts with It's.

Let's just move on, shall we? 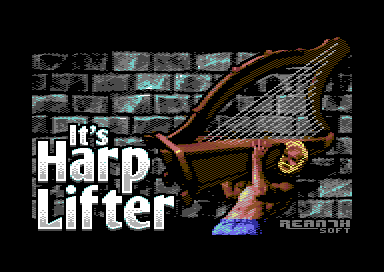 The somewhat baffling loading screen certainly makes it clear that the game's name is to be taken literally. That is indeed a harp, and there is some heavy lifting going on. To what purpose remains shrouded in mystery, at least for now. I'm not sure if the bearded guy's facial expression is supposed to suggest enjoyment or strain. It could be both, for all I know. Printed on a street poster, this picture could probably masquerade as an advertisement for a gym whose training equipment is weirdly music-themed.

Hopefully, the game can shed some light on what is happening here... 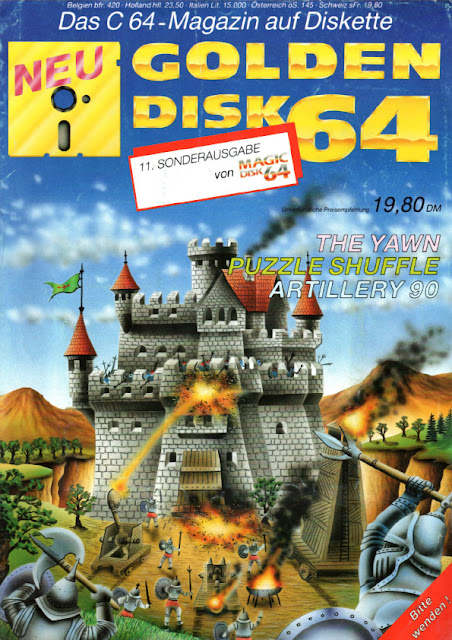 Cover
For the second time, Golden Disk 64 sports a medieval siege scene on its cover. Compared to issue 08/90, this one is a bit more grounded in reality. For one, it doesn't feature any trolls. Instead, there is a collection of actual siege weapons, like catapults and a mobile tower. Also, this castle's drawbridge is up which should help tremendously to keep enemies out.

The two knights in the foreground are in similar positions as the two knights seen in the 08/90 cover, and the one on the left is even wearing the same helmet, just without the historically inaccurate horns. The way he's waving his axe and shield at nothing makes me imagine that he's running down the hill and shouting something akin to "RRAAARGH!".

I'm not very impressed with the people defending the castle from within, though. Just look at the chaos of spears that poke out of the battlements at random angles. It's as if nobody in there knows how to hold their weapons. On the other hand, the occupants' siege tower is on fire, so the defenders must've done something right. Either that or the attackers severely misjudged the aim of one of their own catapults.

Once again, the cover suffers from perspective issues. However, many medieval illustrations display similar problems with architecture, so let's just say that the artist was trying to emulate that particular style.

The artwork obviously refers to the text/graphics adventure The Yawn, which is the only game on the disk that takes place in a medieval setting. There is no siege going on in The Yawn though, and the game is way goofier than this depiction of castle warfare might suggest.

When platform games emerged in the early eighties, there was this period in (European) home computing where single-screen titles like Manic Miner were regarded as genre archetypes. This resulted in a lot of games in the same vein with awkward controls where each jump was a leap of faith and being one pixel off the mark often had disastrous results. Megamax is very much informed by these quirks and therefore feels like a platformer from the very distant past.

The title screen certainly looks very "old school" for a game released in the early nineties, with a logo consisting of chunky, double-sized sprites. The reveal of the letters is accompanied by the kind of screechy sound effects that movies or TV shows still like to use whenever somebody is playing video games somewhere off-screen. The game transitions into a piece of music from Wolfgang Amadeus Mozart's opera The Magic Flute. At least that's what HVSC's SID Tune Information List says; I would not have recognized the melody otherwise. It sounds pleasant enough, though, if a bit plain. Manic Miner also made extensive use of classical music, but its arrangement of the Blue Danube is an assault on the ears.

If you haven't guessed it already, I like playing old video games. I'm not a purist, however, and I enjoy the conveniences that emulators have to offer, even though the experience may not be completely authentic. If I feel a C64 game is too hard, I have no qualms about using savestates.

Enter JASG, a game that has me dying over and over, despite the fact that I savestate frequently and use a trainer that provides infinite lives. At the time of writing, I have been unable to complete it, even though I've been using cheats up the wazoo. That should tell you something about how exceptionally stupidly difficult this game is.

JASG challenges you to control a jumping ball through several mazes and collect all dots. It sounds so deceptively simple.

Artillery '90 is an updated version of Xonox's classic Artillery Duel from 1983. It's a game for two players (or one player against a computer AI) who barricade themselves in stationary turrets and take turns in shooting projectiles at each other until one blows up in a fiery explosion. 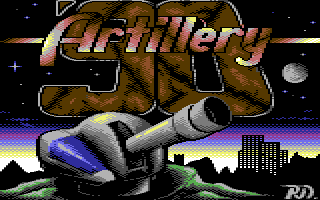 It's 2018, and there is time for Klax some recursion, as I look back retrospectively at my retrospective blog. Why is that, you ask? Because Adventures in 16 Colors is celebrating its first year of existence!


The first article I posted on this blog appeared on the 6th of January 2017, so I take that as the day of birth for Ai16C. The article was about The 16 Colors of the VIC-II. While not the most exciting of topics, it represents the fundament of this blog, as about 95% of the images that I post here use the C64's color palette (specifically, Philip "pepto" Timmermann's colodore version).