In 1989 I got my first computer, a second-hand Commodore 64 along with a lot of software and books. This was the starting point of my fascination with computer graphics, programming, and games, all of which influenced large parts of my later life. This blog is about my experiences with the C64, past and present. Expect a lot of nostalgia, some humor, loads of old-school pixel art, and the occasional drift into rambling about the C64's inner workings.

I intend to look at the games, demos and other software titles which I encountered during my time with the C64. My main focus will be on the more obscure titles from German diskmags which aren't widely discussed on the web. Occasionally I'll also show off some of my own creations if I feel like embarrassing myself.

Rest assured that if I sometimes criticize or make fun of the art shown on this blog, it's never intended to be mean-spirited. I have the utmost respect for the artists, and I know how working under restrictions and time limits can sometimes affect the outcome. Also, it's important to understand that a lot of the art was done by teenagers who did this as a hobby and not (yet) professionally.

There is a YouTube channel with the same name that runs parallel to this blog. I'll mainly use it to upload music tracks from the games I'm discussing here and maybe the occasional gameplay video.

In case you are wondering, the name Adventures in 16 Colors refers to the Commodore 64's color palette which consists of 16 predefined colors. The name is also a lie since most of the time my C64 was attached to a green monochrome monitor. Instead of colors, I saw different patterns which I soon started to associate with their actual colors. Aside from that, some of my favorite games on the C64 were adventures, so there is a bit of a double meaning. 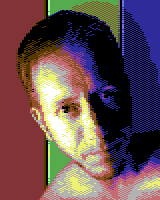 Hello, I'm just some guy who still fondly remembers the countless hours he spent sitting in front of a C64. I've been playing games (and making them) for decades now, so I guess it's more than just a phase.

If you are interested, you can also find me at www.hulub.ch where I documented my games and other related works. Unfortunately, I hardly have any spare time left to work on personal projects nowadays, thus I haven't updated the site in years.

If you want to get in touch, you can contact me at thonr2(at)hotmail.com. Any feedback is appreciated!