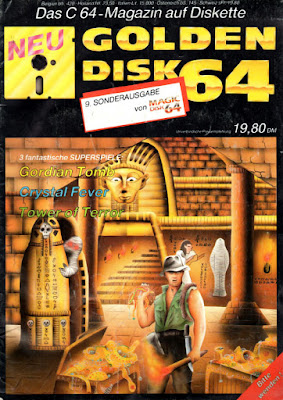 Cover
Do you like adventure movies? Do you like Indiana Jones? If so, we've got him, or at least some other guy dressed up very much like him, right here on the cover! He's just found the treasures hidden within the walls of some ancient king's tomb, and, judging by his dumbfounded stare, he's also discovered that he is being filmed.

Of the three games on this issue's disk, the cover is clearly referencing Gordian Tomb, even though the burial chamber depicted here looks decidedly Egyptian. There is also a mummy emerging from its sarcophagus, but the game does not feature any bandaged tomb-dwellers. Furthermore, if you're hoping to play a whip swinging and gun-toting archaeologist, you'll inevitably be disappointed to find that Gordian Tomb's protagonist is a slight, unarmed guy wearing a sombrero.

I could be generous and call the apparent lack of common vanishing points in this picture an intentional depiction of non-Euclidean geometry to make the tomb feel unsettling and wrong. Alternatively, I could just assume the more probable case, namely that the artist either didn't much care for or wasn't very good at drawing stuff in proper perspective.

As it is usually the case, the cover image is not meant to be an accurate representation of the title it's referencing, as it was probably created long before there even was a playable version of the game.

Compared to the previous issue, the Golden Disk logo underwent a slight facelift: It's still shiny, but it now has horizontal metal gradients in the style of those chrome text effects prevalent in the 80s. The label of the disk was changed from the English NEW to the German NEU, which I find kind of amusing. I imagine someone working at CP Verlag complained about there being too many English words on the cover.

Despite its somewhat amateurish look, I remember liking this cover image when I saw the magazine at the local kiosk. The promise of a treasure hunt inside a tomb was tantalizing enough that I forked over the 20 bucks, which was a hefty sum for a twelve-year-old. In the top right corner, you can see a scan of that very issue with literally decades of smudges and scratches all over it. Click on it for a larger and potentially more disgusting view.

Today's game plays like Missile Command as if it were coded by someone who never saw the 1980 Atari classic, but instead had somebody else describe it to him in a confusing manner. Welcome to Anti: 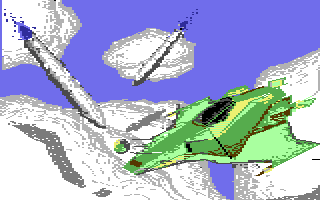 Here's the intro picture which isn't used in the game but gets shown ahead of the instructions in the Game On diskmag itself. Even if you haven't seen the game yet, you can probably guess that your task involves piloting a green aircraft and defending the area from incoming missiles. The way to ward off enemy projectiles is rather odd and involves placing green balls that float in mid-air. More on that when we start the game.

Today's game perfectly fits into the category Short & Sweet, but with the emphasis clearly on short. Like, 20 seconds short. It's Dinorace, also known as Dinorace 64 or The Great Dinorace 64:

The unassuming intro screen not only sends digital greetings to various people and entities, it also displays a German scroll text that relates the background story to the player. Here's a summary:

In the distant future, dinosaurs have become de-extinct. Mankind is so awestruck by this contemporary miracle that it forces the Cretaceous creatures to compete in fights and foot races. Anyone who owns an Intercomputer TV3 can join these live spectacles from the comfort of their home and get remote command over one of the "participating" dinosaurs. The latest and most popular event is a race taking place on a battle asteroid (?) with its weather permanently set to rainstorms. The frequent thundering and flashing makes sure that all dinosaurs are completely scared out of their little minds while running, which is always a hoot to watch.

Admittedly, the original text isn't quite as sarcastic, but it's very clear that the author is going for an intentionally ridiculous premise. The jolly tune that's playing during this intro further manages to underline the game's flippant tone.

Shift is a puzzle game in the vein of Sokoban with lots of additional elements that mix up the age-old formula of pushing boxes around. I remember being quite enamored with this title, though at the time I had not been familiar with Sokoban or any of its numerous clones. Let's see how well it holds up today:

Shift starts with this rather plain title screen which uses nothing but the C64's standard character set (commonly known as PETSCII, Commodore's version of the ASCII standard). There is nothing special going on here, except for the fact that the company logo is about seven times bigger than the game's actual name. Talk about getting your priorities straight.

What the title screen lacks in graphical fidelity, it makes up with its energetic music that achieves the remarkable feat of using a polka beat without sounding overly cheesy.