Gordian Tomb is a flick-screen action adventure game inspired by Utopia Software's Montezuma's Revenge (1984). You are an explorer/archaeologist who is looking for a legendary treasure chamber inside a massive pyramid.

The titular Gordian Tomb probably refers to the burial ground that was found in the ruins of Gordium, the capital city of ancient Phrygia (located in today's Turkey). The tomb is a so-called tumulus, a large mound made out of earth and stone that's built on top of a grave. From outside it looks very much like a pyramid, though it is round in shape, like a cone. It is also known as the Tomb of Midas, even though the person buried in there is assumed to be Midas' father, Gordias, who founded Gordium. Midas is best known for the myth connected to him that anything he touched turned into gold. 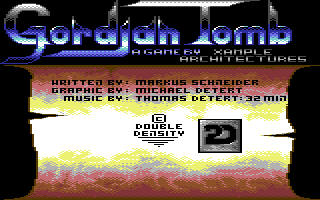 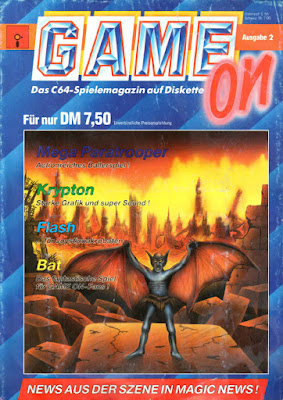 Cover
In a post-apocalyptic world, Manbat will rule over the ashes of civilization. He probably won't be able to enjoy his reign for long, unless he's developed a special diet consisting of rubble, molten steel, and fire.
Despite his savage looks, he was decent enough to put on a loincloth. It looks like it's made up of leaves, though, which aren't that well-known for being fire resistant.

The image is obviously trying to depict the fourth game mentioned on the cover, which is simply named Bat. The thing is, Bat is nothing else but a Pong clone, and a particularly boring one at that. It is so crazily misrepresented that I get the impression the artist didn't know anything about the game except for the name. Either that, or it's just really hard to paint an interesting picture for a game that consists of nothing else than a ball and two paddles.