Today's game is a non-stop action fest which sees you at the helm of a giant bipedal battle mech that has to destroy the lunar forces of the evil mastermind Zorloxx. This is Puzzle Shuffle:

Wait, my bad. It's not an action game at all; this is a sliding tile puzzle with pictures.

Aside from games and utilities, Magic Disk 64 occasionally featured demoscene productions on the disk. Ecstatic Code by Cosmos Designs was the very first demo I ever got to see, and it introduced me to the whole concept of non-interactive, audiovisual real-time presentations. 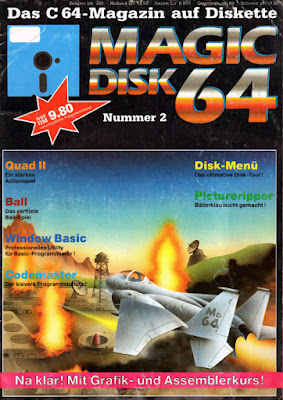 Cover
Up until now, each cover I've looked at illustrated one of the games found on that issue's disk. Not in this case, though, as what we have here is an exciting glimpse into the future. At least, it was at the time when this issue came out.

As far as I can tell, this cover is a loose interpretation of Anti, a game that would appear one month later on Game On 03/90: In Anti you are indeed flying around in a (VTOL) jet. However, you are not attacking a military base, but instead defending a nuclear power plant from incoming missiles.

Perhaps there were plans to publish Anti on this issue, but then the game had to be postponed for one reason or another. Admittedly, this is pure speculation on my part. Maybe they were just in dire need to put something exciting on the cover because the games listed on it were pretty much the antithesis of excitement.

The artwork is of the magazine's usual quality. It has some nice color gradients, but everything looks a bit lopsided, thanks to various perspective errors. The jet's exhausts, for example, are so deformed, they seem to be melting from the sheer heat that's coming out of them. The jet also appears to be shooting a laser beam at an awkward angle that caused some structure in the background to catch fire. It could also be a very distinct heat trail of a missile that already hit its mark.

Starting with this issue, the cover lines do not have solid colored backgrounds anymore, which makes some of them a bit hard to read, but allows for the picture to be more visible.