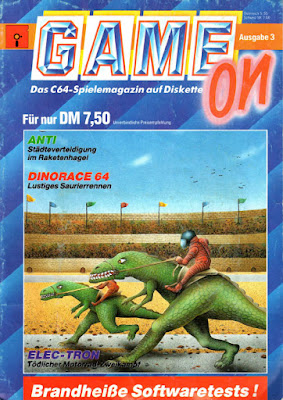 Cover
In the distant future, dinosaurs will roam the Earth again, and mankind will celebrate their return by using them as race animals. Because that's just how we roll.

It's not hard to guess that this cover relates to the game called Dinorace 64, even though it isn't a very accurate depiction. The artist was probably told that Dinorace 64 is a game about racing dinosaurs, but nobody clarified that the prehistoric lizards compete in an individual time trial and run without riders. Inadvertently, this resulted in a cover where the subject matter was presented in a cooler way than how it actually looked in the game.

As with previous covers, the perspective doesn't quite work. The lizard in the back was probably intended to seem further away from the camera. Instead, it just looks like a smaller dinosaur with an equally smaller jockey is overtaking the larger one. Also, the front dinosaur's right leg kind of freaks me out, as its upper thigh seems to go right up to the lizard's arms without any torso in between. Try to imagine how the dinosaur would look like half a second later when the position of its legs would be reversed.

I like how the race is shown to take place on a circular race track in a huge, well-attended stadium. There are even some birds in the background, which I assume are doves the organizers released during the opening ceremony. Let's hope there isn't a huge open fire nearby where half of them get roasted to a crisp, like what happened at the 1988 Summer Olympics in Seoul.

Last but not least, I have to commend the artist for their decision to have the dinosaurs run from right to left, which isn't something you see very often in western illustrations.

A big reason why this blog is called Adventures in 16 Colors stems from my fondness of (text) adventures on the C64. Price of Peril[sic] was the very first adventure game I ever played, and thus it's only fitting that it is also the first one featured on this blog. 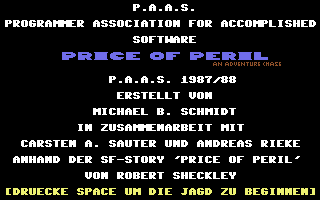 Price of Peril is a German text/graphic adventure based on Robert Sheckley's science fiction short story The Prize of Peril. It was programmed in 1987/88 by Michael B. Schmidt who is better known as Smudo, one quarter of the German hip hop group Die Fantastischen Vier. That's a fine piece of trivia right there, something with which to dazzle and enlighten your friends.