In the wake of Tetris, the early nineties became a fertile ground for computer puzzle games. During that period, everyone had to release something that involved dropping and/or removing tiles. Here's a game that not only fits the trend perfectly but it also comes with the added bonus of taking place IN SPACE!

Orbit sure knows how to make a remarkable first impression. Here's the game's title logo, orbiting the title screen. You know, because it's called Orbit. Anyway, the logo is made up of a total of 24 sprites, thus each of the C64's eight hardware sprites gets drawn three times per frame. Actually, strike that, it's five times per frame: The sprites are also used in the upper and lower border to display the scores. That's a lot of multiplexing just for the title screen.

If we want to reduce C64 games to their basic essentials, a lot of them come down to a test of reflexes. Reaction is different. It does the reduction for us in advance and simply presents itself as a pure test of dexterity: 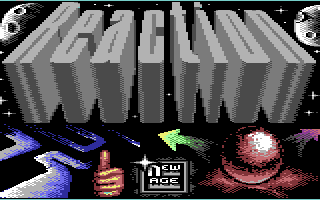 You can't accuse the game of false advertising; what it's about can be found right in its name. Admittedly, the iconography surrounding the title logo may be a bit bewildering. Without wanting to spoil too much, I can already confirm that Reaction does indeed contain stars, moons, balls, arrows, blue windy paths, and a disembodied hand doing thumb signals. Unfortunately, that probably makes the game appear more exciting than it ends up being.