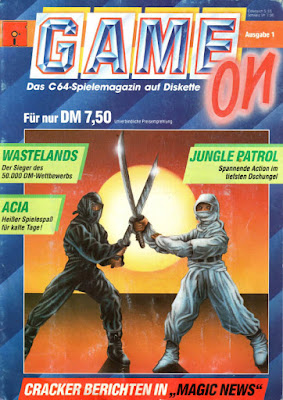 I think from a distance the cover art looks fine. The colors are quite striking, and the elements are easily recognizable. But as soon as you take a closer look, the picture falls apart.

Obviously, those are two ninjas locked in a sword fight, because ninjas are cool, right? The image also suggests that one of the games on this disk is a fighting game, which is very much true for Wastelands.

But what is the ninja dude in white doing with his left hand? Did he want to grab his sword with both hands, but then had a change of mind in mid-motion? What's more, the back of his right hand is rubbing against black ninja's blade. That can't be healthy for long.

The more I look at this scene, the more I get the feeling that this depicts a photo shoot with two unwilling subjects dressed up as warriors. Both of them are looking at something or someone off-screen, giving the impression that they'd rather be somewhere else. The weird angles of the shadows on the ground only support my theory that this illustrates a photo shoot at a studio.

As for the white ninja's left hand, I think I have a good idea what happened there: The artist wanted the ninja to hold the sword in both hands, but then realized that the pose made it impossible for the left arm to reach the hilt without looking unnaturally long. At that point, it was probably too late to start over and change the pose, so the artist drew the ninja's left hand as if it were awkwardly touching the right arm's sleeve.

Not that I noticed any of this when I bought the magazine as a kid. I thought it looked simply awesome.

The game opens with a blank screen and a digitized voice sample shouting "WELCOME TO WASTELANDS!" with a faint German accent. The voice is clear enough that you can hear the "s" at the end, thus erasing any doubt you might have about which of the two very similar-titled games you're about to play.

Acia is a real-time puzzle game with minor action elements. It's not directly based on an existing game, as far as I am aware, so this might be a rare case where we have a unique concept at our hands.

Jungle Patrol is a side-scrolling action game that is so easy, I could play it for hours. With the emphasis on could, because there are better things one can spend their time on. Like, for instance, writing a blog post about this game! 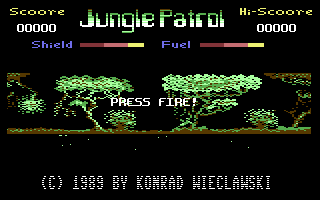 Merry Christmas! is an electronic holiday greeting card that is mildly interactive. As a kid I thought it was quite neat, and I sort of made a tradition out of starting it up every Christmas and showing it to my parents and grandparents, much to the latter's bewilderment.

I'm writing this article in February, so I'm either two months late or ten months early.

Electra is a horizontal-scrolling shooter very much in the vein of Uridium. 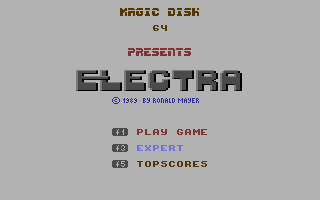 The game starts with this rather gray title screen which doesn't exactly incite excitement. There is no animation or music, just a static, suppressive silence which is expectantly waiting for you to press a function key. The most remarkable thing here is probably the fact that five different fonts made it into one screen.

Operation Wolf was an arcade game released by Taito in 1987. It's a side-scrolling shooting gallery that uses a mounted gun as an optical controller. You point and shoot at stuff on the screen and throw the occasional grenade. Getting shot or shooting friendly targets, such as civilians or nurses, increases your injury meter. If the meter is full, you're dead. Your ammunition is limited, but you can restock it (in classic video game logic) by shooting ammo containers and animals.

The game was ported to several consoles and home computer platforms by Ocean. The C64 conversion was quite decent and one of the few games that supported the use of a mouse.

Anyway, on to No Mercy (Preview). The game doesn't bother to hide its inspiration at all. Just compare Operation Wolf's cover art to No Mercy's intro screen: